Sepsis is a complex syndrome that represents a major challenge for the intensivist, as it is quite frequent in intensive care leading to multiple organ complications and mortality.

The clinical complexity of this syndrome derives mainly from the profound hemodynamic changes that characterise sepsis itself and septic shock. These alterations include a typical triad: hypovolemia, decrease of vascular tone and myocardial depression. These conditions are also accompanied by abnormal redistribution of blood flow between the various organs due to multiple microcirculatory derangement.

The most evident clinical and hemodynamic manifestation of the septic patient is arterial hypotension, often resistant to pharmacological treatment. It is linked to the three cardiovascular alterations previously reported:

a) hypovolaemia, mainly linked to fluid shift due to increased vascular permeability (absolute hypovolemia), and determined by reduced vascular tone and increased venous capacity (relative hypovolemia);
b) decrease in vascular tone, linked to reduced or loss of adrenergic response by smooth muscle cells of the vascular wall;
c) myocardial depression,  which may appear later because it recognizes complex mechanisms and slower to establish (e.g. mitochondrial dysfunction, metabolic and autonomic alterations, ….) and which involves a reduced cardiac output and a low tissue oxygen delivery.

When microcirculatory dysfunction prevails over macrodynamic alterations, the oxygen delivery can be increased due to the high cardiac output, although oxygen peripheral extraction is decreased. 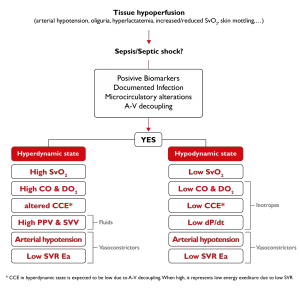 Img. 6 – A typical example of hemodynamic monitoring-based therapy in a septic patient

These complex hemodynamic alterations mean that sepsis can occur, for example, with a hemodynamic state called “hyperdynamic“. This condition of hyper-dynamism (high flow rate) is characterized by low systemic vascular resistance, reduced arterial elastance, arterial hypotension and high cardiac output.
In other cases, the hemodynamic profile of the septic patient may be characterized by a “hypodynamic” state, which manifests itself with low vascular resistance, arterial hypotension and low cardiac output, the latter resulting from myocardial dysfunction. In both cases, the tissue use of oxygen is very low and hemodynamic variations are characterized by a decoupling between vascular tone and ventricular contractility (A-V decoupling).